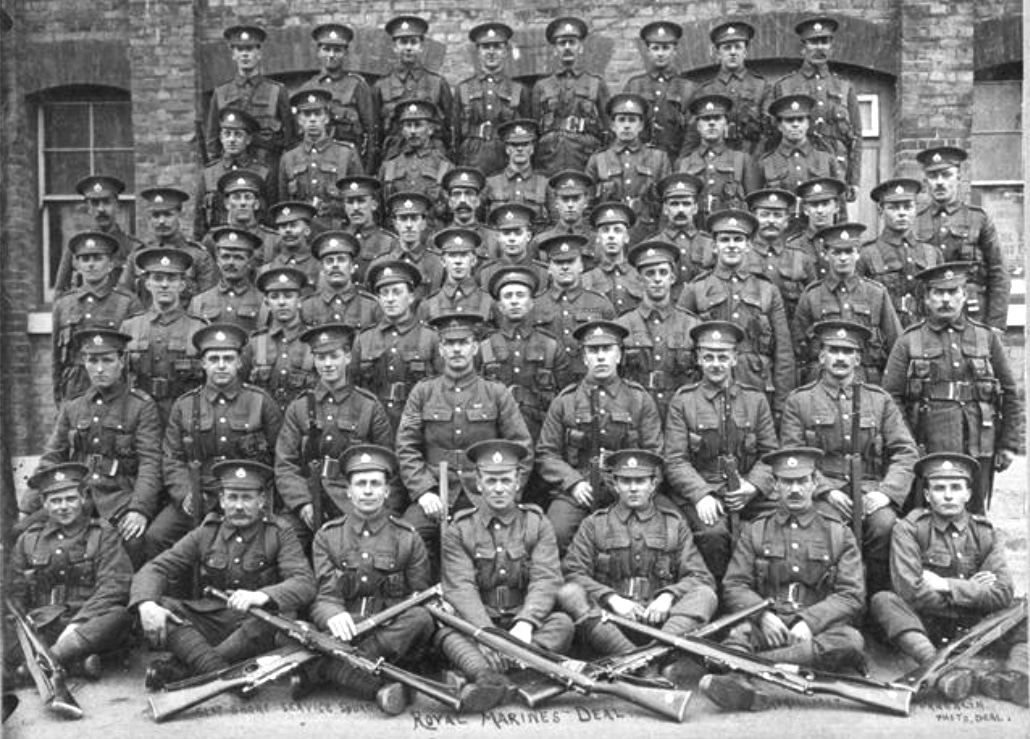 The Royal Marines in Deal and Walmer

Establishment of a Naval Yard (responsible for the logistical support of warships anchored in the Downs) in the area immediately to the north of Deal Castle.

A company of the Duke of York and Albany’s Maritime Regiment of Foot (raised in 1664 and the antecedent of the Royal Marines) was deployed to Deal during the Second Anglo-Dutch War. Its main task was to protect the Naval Yard. Although it is not certain that there was a continuous marine presence in Deal from 1665, it is reasonable to assume that marines were required to guard the Naval Yard and to be prepared to embark for service afloat.

Outbreak of war with France. This triggered the construction of two new barracks for the Army:

The Admiralty purchased an existing civilian hospital for seamen; this was designated the Royal Naval Hospital.

The Royal Naval Hospital was struck by lightning. Most of the Hospital was then demolished and rebuilt. The site of the rebuilt Hospital was known as Hospital Barracks although the buildings there were not exclusively dedicated to hospital purposes in subsequent years. 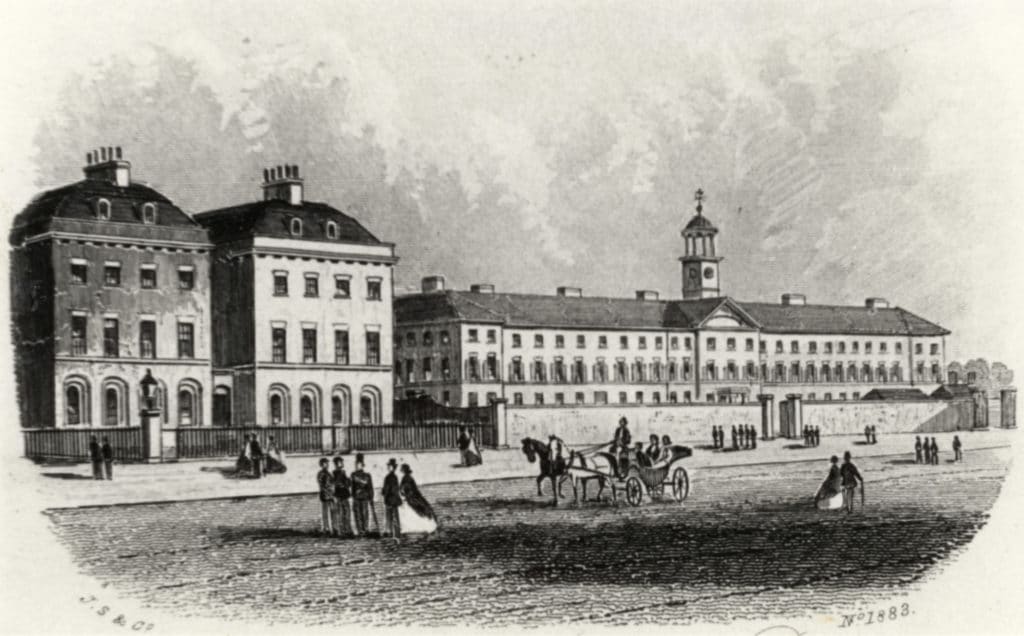 Construction of a combined chapel/school building in North Barracks (then owned by the Army).

Closure of the Naval Yard; it was sold off and demolished in the following year.

Expansion of the Depot Royal Marines, Deal into North and South Barracks (the Army surrendering its ownership of these sites in exchange for the transfer of sites in Woolwich from the Admiralty).

Establishment of the Physical Training School.

Golden Jubilee of HM Queen Victoria marked by the erection of the Jubilee Gates at the east entrance to South Barracks.

Establishment of the Depot Band (initially 17 musicians but strength increased to 25 from 1900). 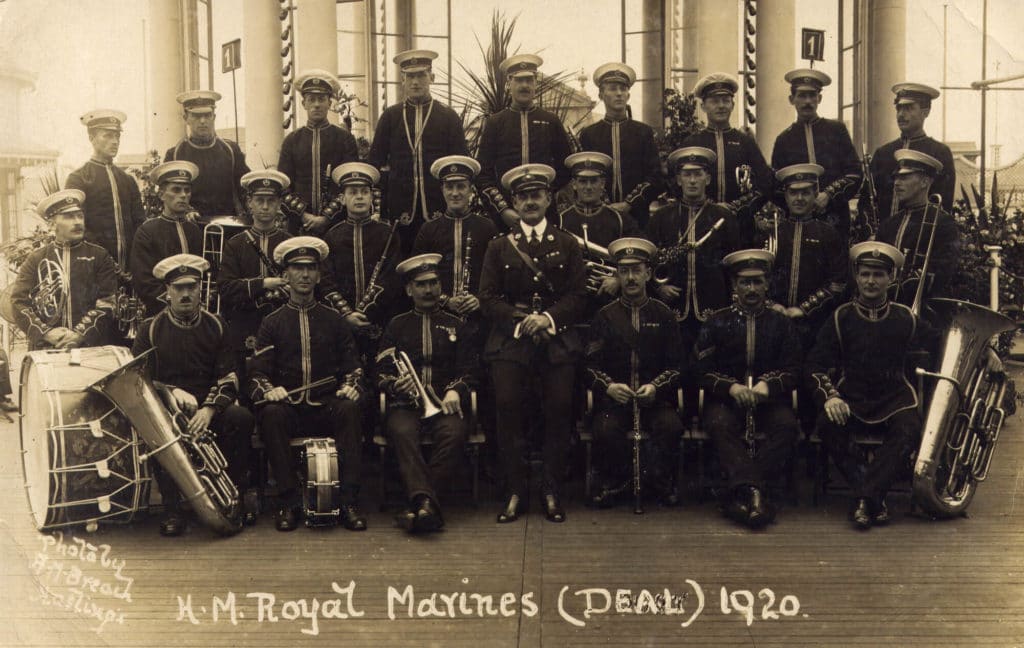 Swimming bath (on site of what is now the Cedars Surgery) completed.

Acquisition of land to the west of South Barracks for use as a drill field.

A new Infirmary was opened on a site to the west of Hospital Barracks that had been used previously as a drill field. This location was known as Infirmary Barracks. The former Hospital Barracks were re-designated East Barracks and were modified to provide accommodation for 300 men.

Construction of the Globe Theatre in the south-west corner of North Barracks and of a new guardroom at the Canada Road entrance to North Barracks.

The Admiralty acquired the freehold of Kingsdown rifle range by compulsory purchase. 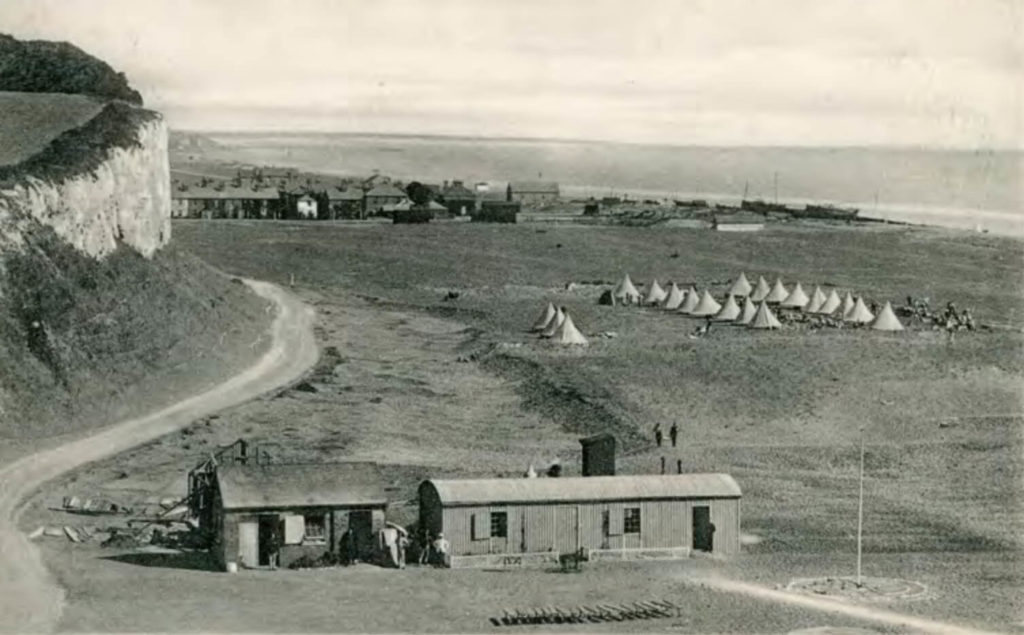 Consecration of Depot Church of St Michael and All Angels.

Mobilization of the Royal Naval Division in Deal, Walmer and Betteshanger. The Division comprised two Royal Naval Brigades (mainly naval reservists surplus to the mobilization requirements of the Fleet) and one Royal Marine Brigade (deployed very briefly to Ostend at the end of August).

The entire Royal Naval Division was deployed in an unsuccessful attempt to help prevent the German capture of Antwerp. Following its return to England, the Division was relocated to Blandford and it fought at Gallipoli in 1915.

Recruit training at the Depot was reduced to six weeks. 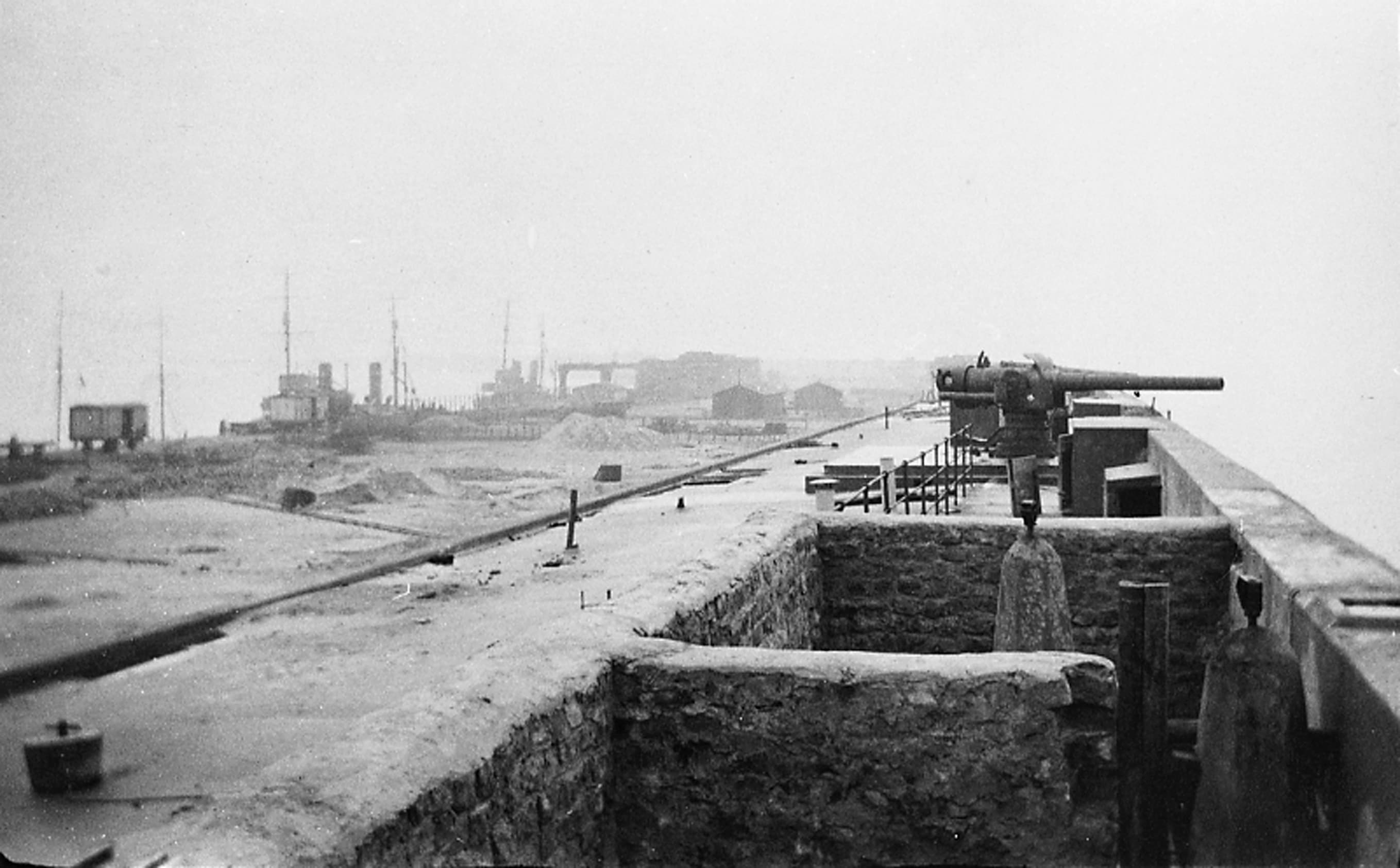 HM King George V visited the Depot. He inspected the preparations being made by the 4th Battalion Royal Marines for the forthcoming raid on Zeebrugge. He directed that henceforth:

The raid on Zeebrugge. The exploits of the 4th Battalion Royal Marines during this action resulted in the award of two Victoria Crosses to the Battalion, the recipients being selected by ballot.

Closure of the Depot schools in North Barracks (the children being transferred to St Saviour’s School).

The Royal Naval School of Music relocated to Deal and was primarily accommodated in East Barracks. The Depot Band stood down. 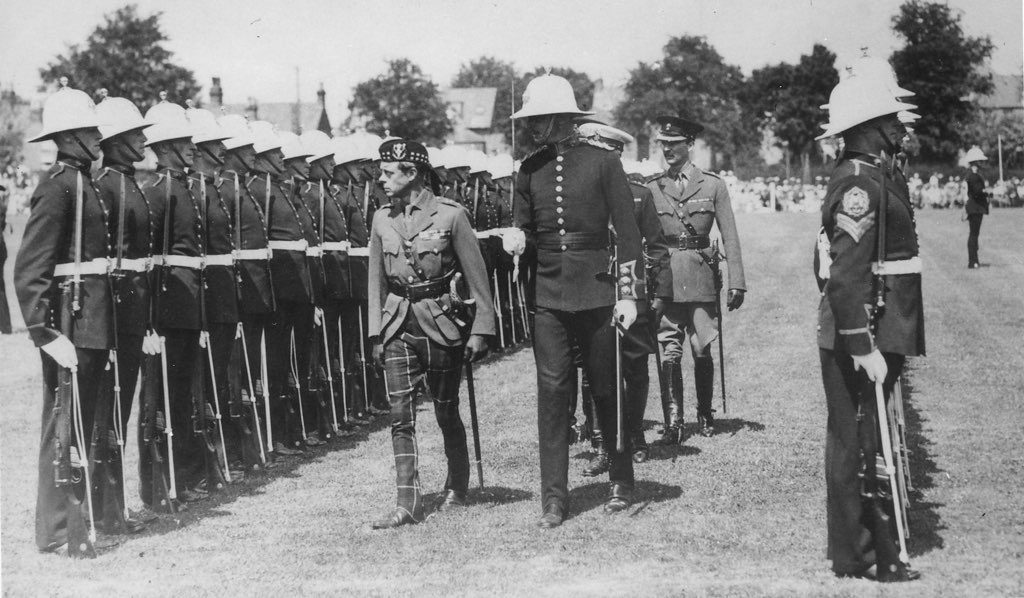 The Admiralty purchased 30 acres of land at Coldblow for playing fields (cricket, hockey and rugby) and a pavilion.

Completion of a major expansion and refurbishment of the 19th century gymnasium in South Barracks.

The Royal Naval School of Music and many recruit training activities were evacuated elsewhere. Over the period 1940-43 the residual presence in Deal was designated the Royal Marine Holding Battalion.

A Royal Marine Siege Regiment was responsible for two 14-inch cross-Channel guns installed near St Margaret’s at Cliffe. The Regiment also manned three 13.5-inch railway guns until these were handed over to the Army in 1943.

A Non-Commissioned Officers’ School was located in East Barracks. Students made use of training facilities established in Kingsdown holiday camp.

Ceremonial conferring the Honorary Freedom of Deal on the Royal Marines.

The organization and roles of the Royal Marines after the Second World War had a major impact on the training conducted at the Depot. The Depot now conducted only Phase 1 training for Continuous Service (CS) and National Service (NS) recruit squads, members of these squads moving on to other locations to complete subsequent phases (including commando training). As an example, it is known that CS squads in the early 1950s spent 12 weeks at Deal and a further 28 weeks elsewhere (ie a grand total of 40 weeks exclusive of leave between some phases).

Extensive improvements to the infrastructure in North Barracks, culminating in the opening of a new accommodation block by HM Queen Elizabeth The Queen Mother on 23 May 1956.

Former chapel/school building in North Barracks taken into use as a concert hall and the adjacent former school rooms became musical theory rooms.

Conversion of accommodation within East Barracks into practice rooms, offices, music library and other facilities supporting the Royal Marines School of Music.

HRH The Duke of Edinburgh visited the Depot.

In anticipation of the end of National Service (the last intake was in 1960), a Junior Entry (JE) scheme was introduced for recruits aged 16 and 17. Until 1969 the Junior Marines did their Phase 1 training in Junior Wing alongside Junior Musicians and Junior Buglers before moving on to subsequent phases elsewhere.

Return of a Women’s Royal Naval Service contingent to Deal; accommodated in ‘A’ and ‘B’ Blocks in South Barracks. Members of the Service had served at Deal previously during the First and Second World Wars. 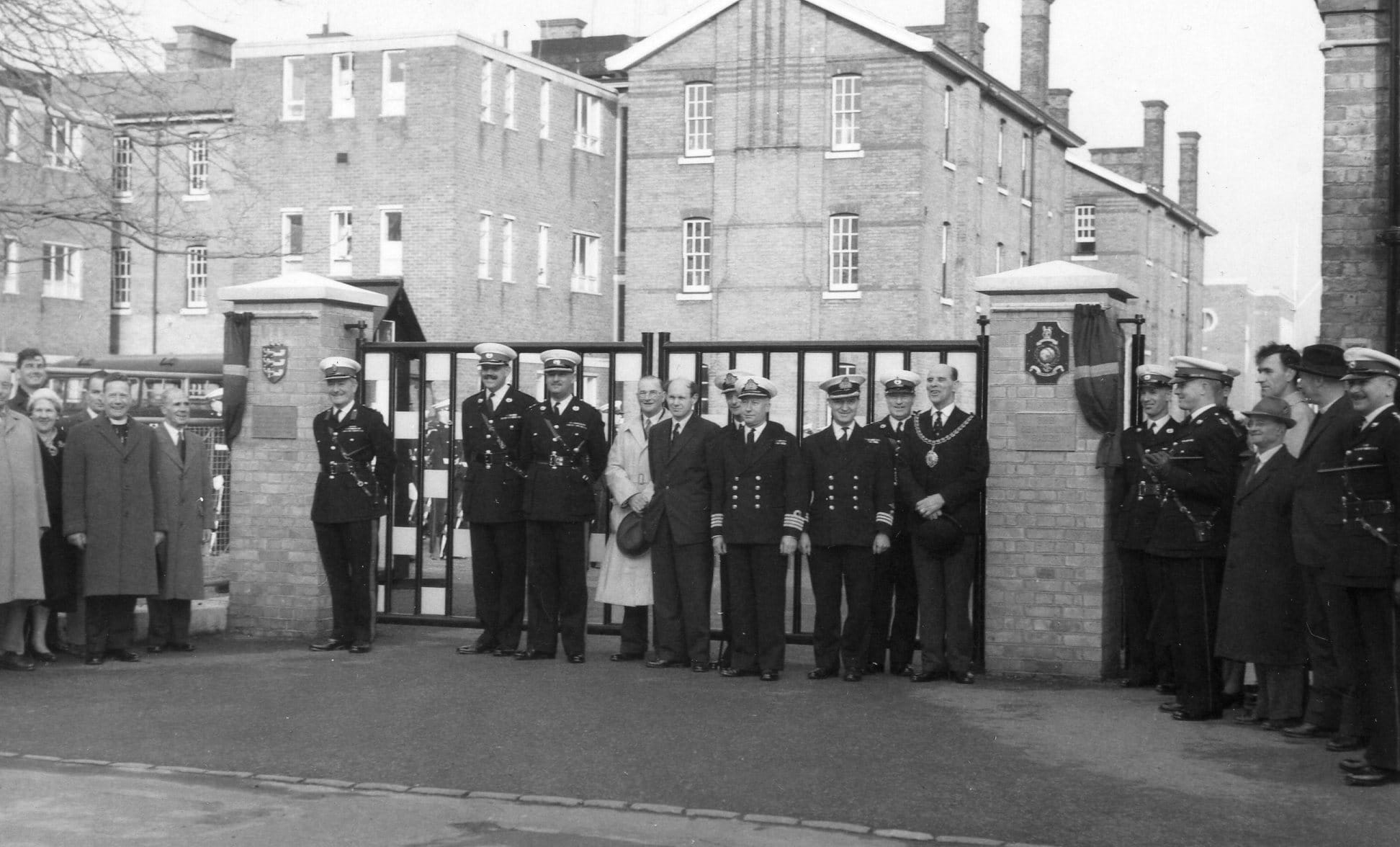 Events to commemorate the centenary of the Depot included the ceremonial opening of Centenary Gates (a gift from the people of Deal and located at the Canada Road entrance to North Barracks) by the Mayor of Deal on 11 December 1961. 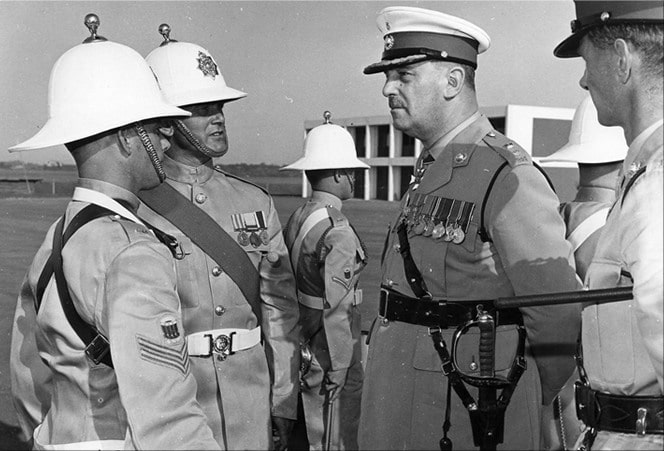 Adult and junior recruits destined for commando training were grouped together in Commando Wing; all recruits training to be Musicians and Buglers formed Music Wing.

Commemoration of the centenary of the establishment of the Physical Training School. 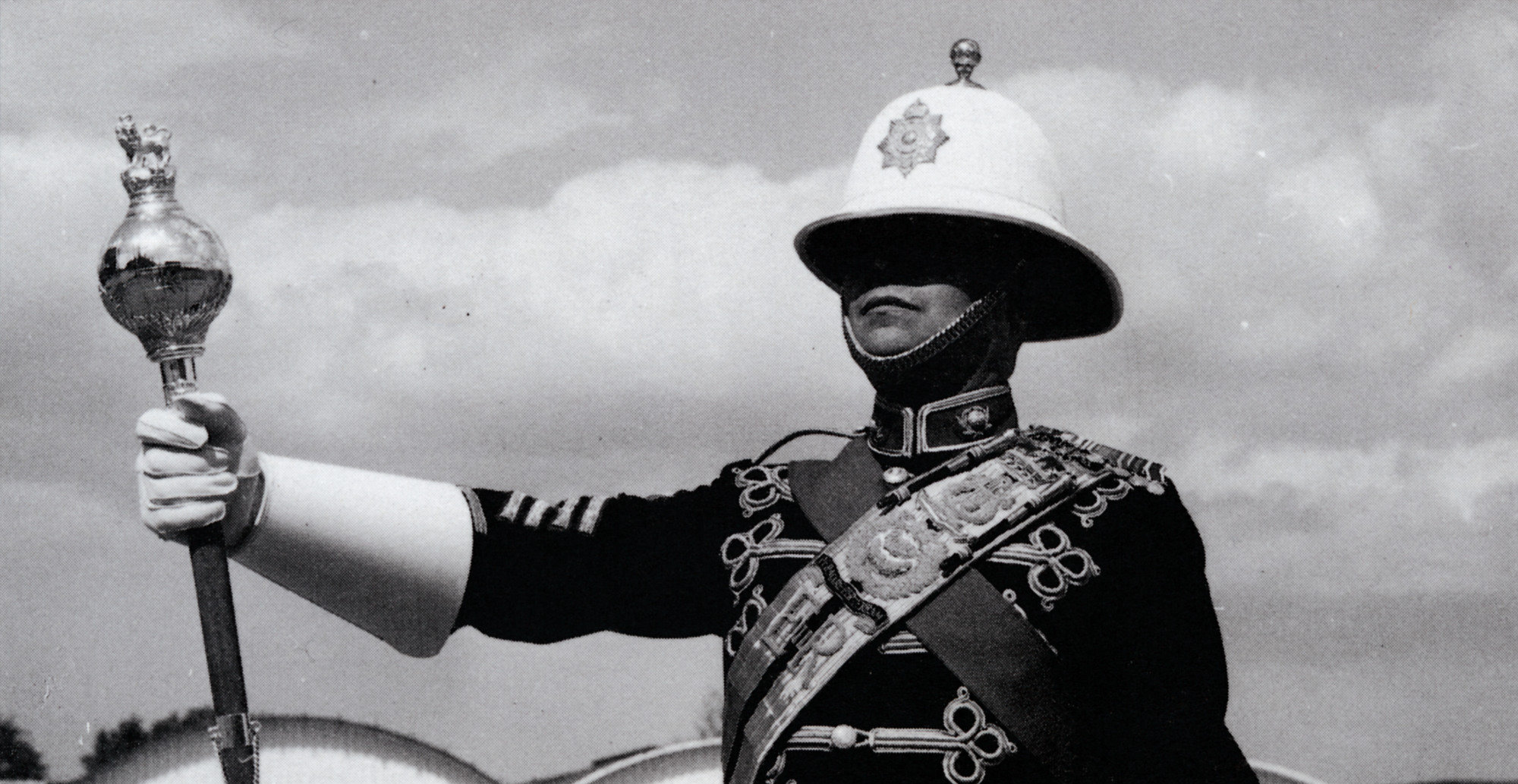 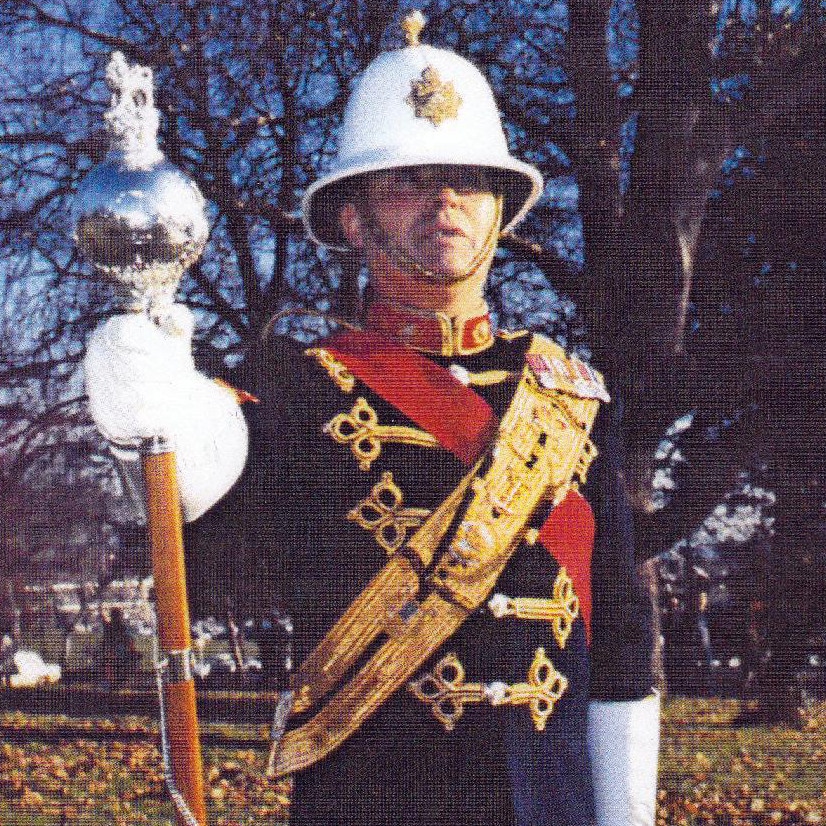 Retirement of Drum Major Charles Bowden BEM (Drum Major of the Band of the Royal Marines School of Music since 1950).

Closure of the Depot Royal Marines, Phase 1 training for both adult and junior recruits aspiring to earn the green beret of the Commando Forces having been transferred to Lympstone.

Inauguration of the Prince’s Badge for the best all-round Musician or Bugler completing training each year. This commemorated HRH The Duke of Edinburgh’s first 25 years as Captain General Royal Marines.

Salerno Company (which had been detached in Malta) joined 41 Commando Royal Marines.

Disbandment of 41 Commando Royal Marines (march through Deal on 14 May 1981 and final disbandment parade on 20 May 1981); this left the Royal Marines School of Music as the sole occupant of the entire Barracks complex.

A General List officer (Lieutenant Colonel D Watson RM) was appointed Commandant of the Royal Marines School of Music, thus allowing the new Principal Director of Music Royal Marines (then Major G A C Hoskins MVO, RM; appointed on the same day) to concentrate on the musical aspects of his duties.

Sale of Infirmary Barracks which were then demolished, the site becoming a new housing estate. 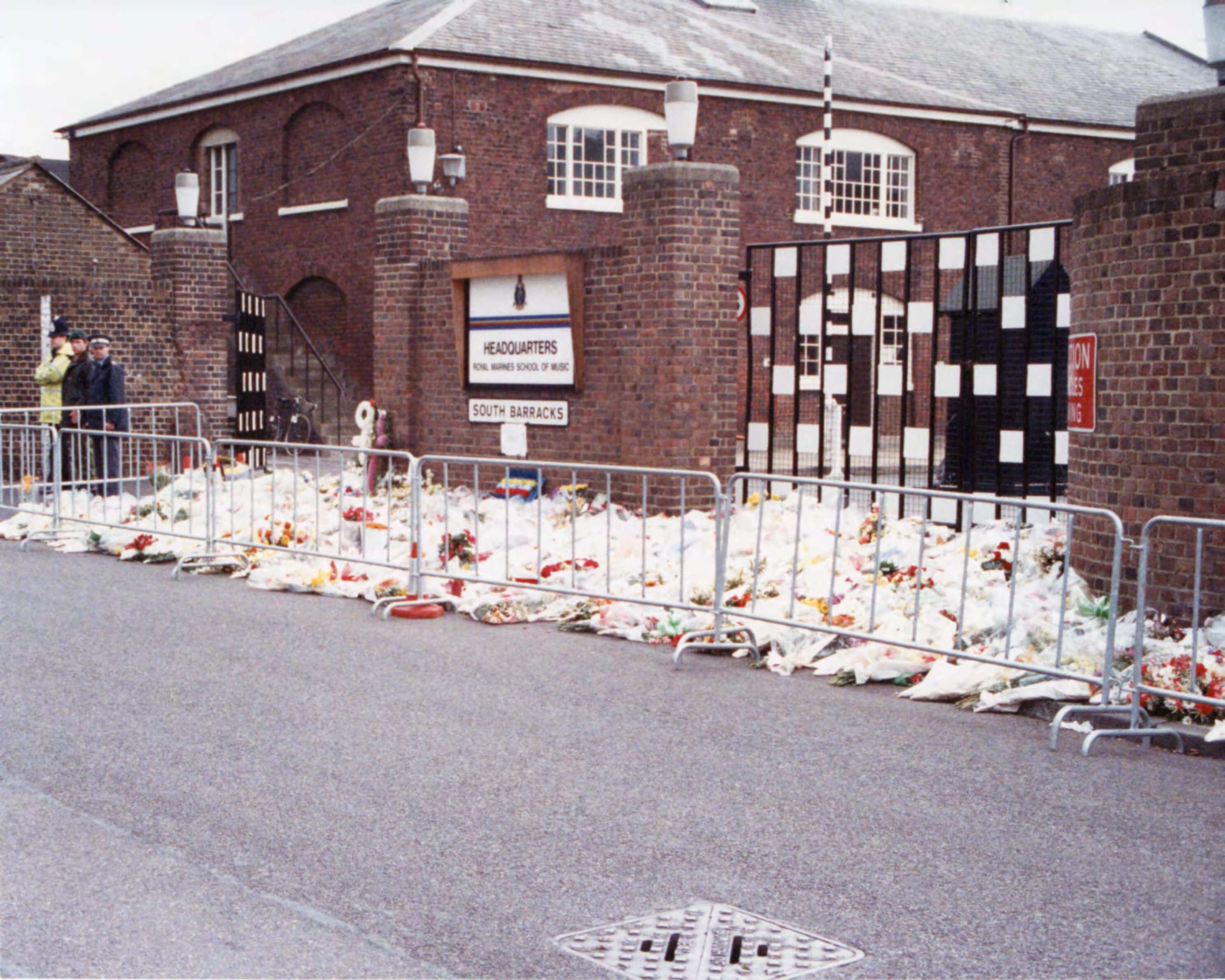 Detonation of a bomb that Irish Republican terrorists had planted in a changing room in North Barracks close to the former chapel/school building. The explosion caused the deaths of 11 members of the Royal Marines School of Music.

Opening concert and handing over ceremony at the Deal Memorial Bandstand on Walmer Green. 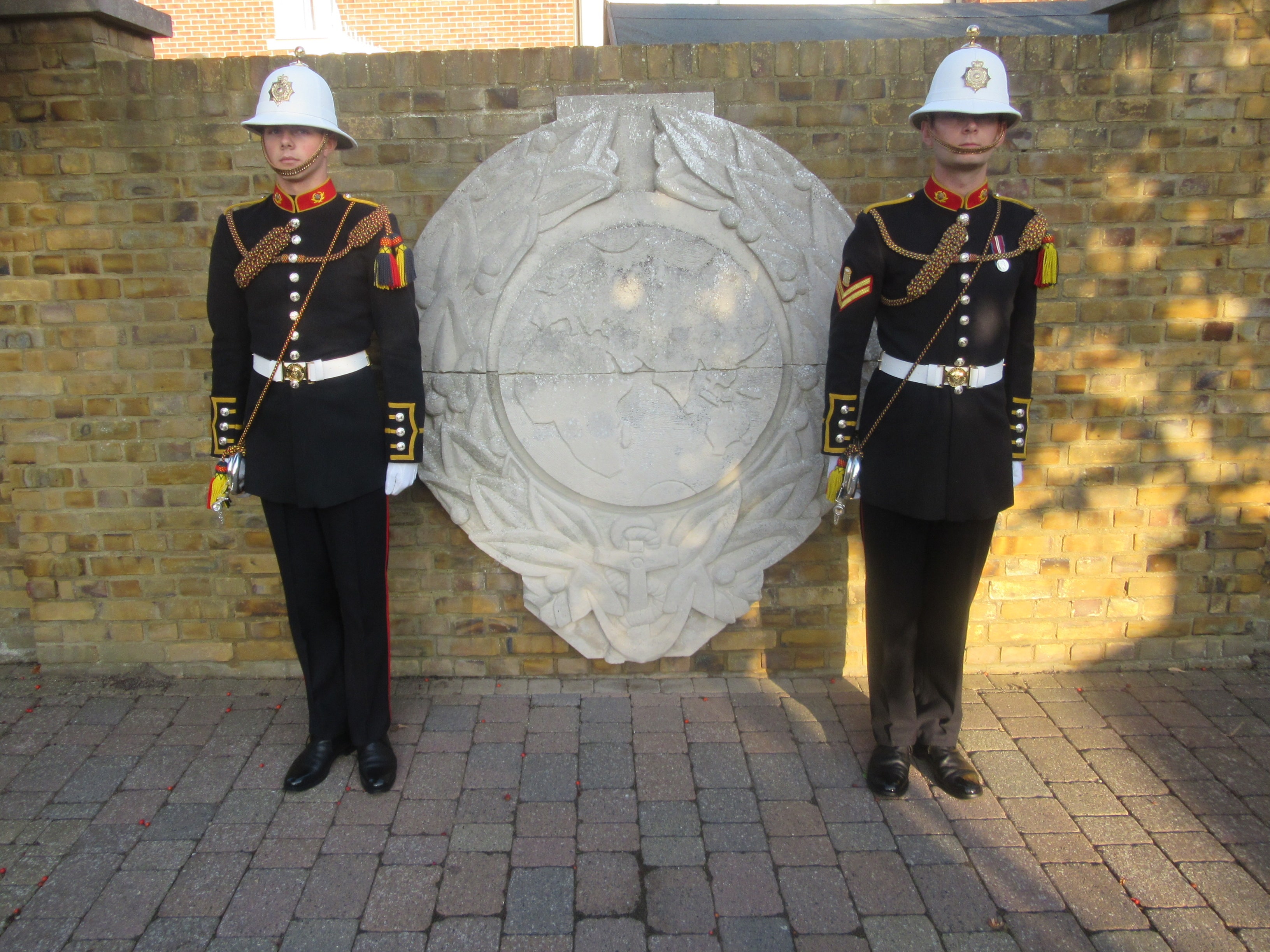 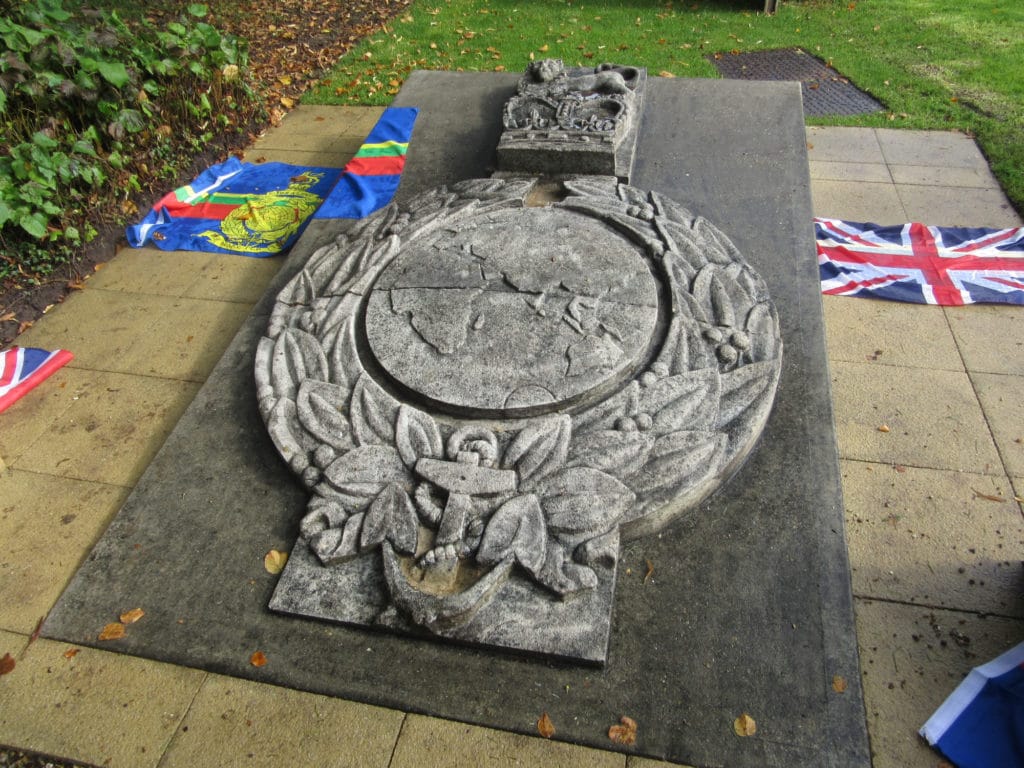 A fire in the former chapel/school building in North Barracks left only the north wall still standing. This wall is the backdrop to the Memorial Garden that commemorates the victims of the 1989 bombing.

Following the death of Major General Ian Harrison CB on 2 April 2008, arrangements were put in place whereby the Captaincy of Deal Castle is to be held ex officio by successive incumbents of the post of Commandant General Royal Marines. The first Captain of Deal Castle under these arrangements was Major General Garry Robison CB; he was Captain for a few months at the very end of his 2006-2009 service as Commandant General.

Formal opening of a memorial erected by the residents of homes in the former North Barracks to commemorate the 350th birthday of the Royal Marines and to pay tribute to the victims of the 1989 bombing.

Re-dedication of the restored and improved gate guardian at Deal Parochial (Church of England) Primary School.

Ceremonial in Dover and Deal to mark the centenary of the Zeebrugge raid and to launch the Royal Marines Heritage Trails (Deal and Walmer). The Collingwood Band of the Royal Marines and a guard furnished by 42 Commando Royal Marines were on parade in Deal and exercised the privilege of the Honorary Freedom of Deal by marching from Deal Castle to Deal Town Hall.